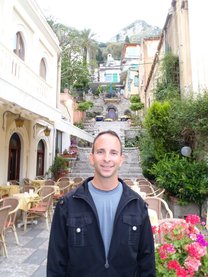 Scott Rubenstein lives near West Palm Beach, Florida. He is a husband and a dad. From 1997 to 2001, he worked at the World Trade Center as a computer programmer. He worked on the 94th floor of the north tower before being transferred to a lower floor in the south tower.  When the towers fell on September 11, 2001, Scott walked down the steps of the south tower and returned home to New Jersey. His day is retraced in the documentary, Retracing 9/11.

Four years later, after a move to Florida, Scott built a new career as a software developer/entrepreneur. Today he is a successful business consultant. Scott was interviewed in November of 2001 by his friend Louis De Lauro and again in October of 2011. Retracing 9/11 interweaves the two interviews with never before seen photos. Scott is very pleased to share his 9/11 story with students in classrooms all over the world and to future generations. 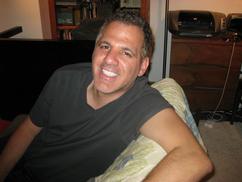 Louis De Lauro was Scott Rubenstein's college roommate 25 years ago. He has remained one of Scott's closest friends over the last two decades. In November of 2001, Louis interviewed Scott on film about 9/11 in Hamilton, NJ. That day, he told Scott that ten years later he would interview him again. Louis' initial intention was simply to document his friend's story, so Scott would be able to share it with family members and future generations. It wasn't until later that Louis realized how well the documentary would work in classrooms.

Louis has taught middle school for 25+ years. He has won several teaching awards during his career. Louis was featured in and helped produce the educational documentary Juggling Life back in 2007 about the charity he founded Juggling Life Inc. - Go to www.jugglinglifeinc.org to learn more. Louis has also been featured in the Star Ledger Series, I am New Jersey. Louis would like to thank Scott for being brave enough to share his experience and innermost thoughts. And he would like to thank Jim, Chris, and Lior for their amazing contributions to the project. 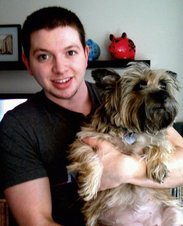 Jim Cooke is a videographer and Final Cut Pro editor. He attended Mercer County Community College where he received an Associates Degree in TV Production. He enjoys using his abilities to create great videos and continues to grow his skills with every opportunity.

Retracing 9/11 is Jim's first educational documentary. Jim recruited his close friend Chris Palka to create all of the background music for the film. Jim regularly volunteers with the charity Juggling Life (founded by Lou De Lauro) and he has created many amazing videos of children juggling.  Jim can be contacted through this website to help you with your video or film project. 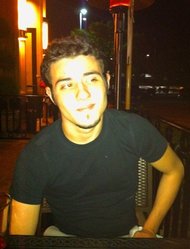 Chris Palka is a creative guy with a great sense of humor! He enjoys music and acting. Chris created all of the background music for the documentary. Chris and Jim have been friends since 6th grade.

Retracing 9/11 is Chris' first educational documentary. Chris can be contacted through this website to help you with your video or film project. 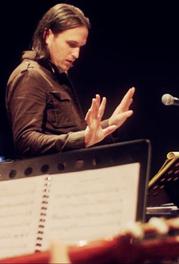 Lior Ron is a Hollywood based composer who specializes in creating original music for the creative film and television markets. As a multi-instrumentalist musician, Lior's mission is to compose new and exciting music for the ever changing and developing media world, while thinking out of the box and constantly being creative.

The opening title Fall From Grace is composed by Lior Ron.
For more information please visit http://lioron.com/
Special Thanks to Winnie Jow for introducing us to Lior Ron.
Special thanks to Matt Turlip for finding us space in NYC for the 2nd interview.